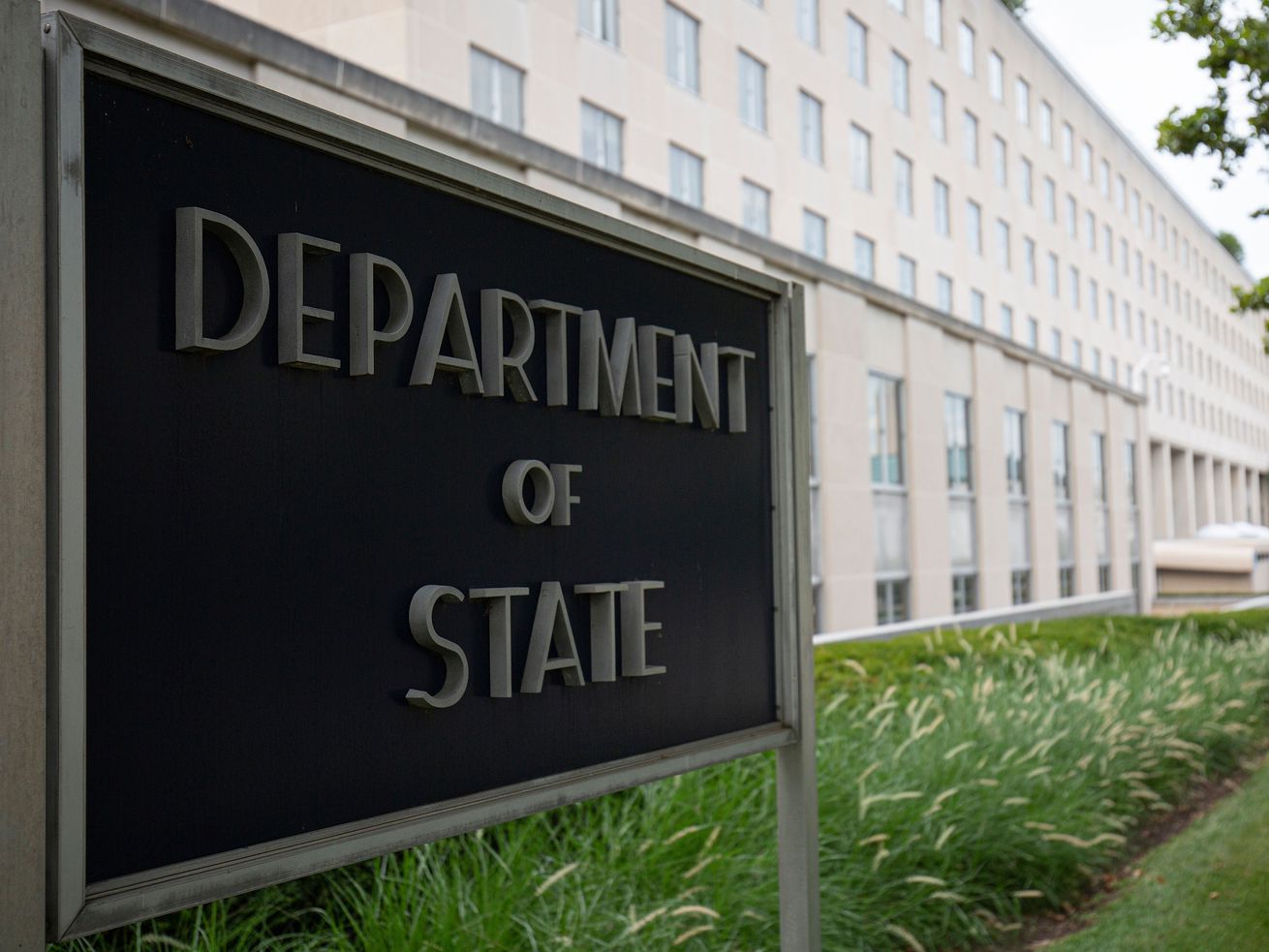 The US Department of State building in Washington, DC. | Alastair Pike/AFP via Getty Images

A new report by the Center for American Progress aims to provide a blueprint for Democrats and the next administration.

If there’s one thing about President Donald Trump’s foreign policy Democrats agree on, it’s that his decimation of the State Department made America less safe. But ask party leaders how to rebuild the nation’s top diplomatic agency, and their answers differ wildly.

There’s no consensus on whether State should be equal to, or more powerful than, the Defense Department. There’s no agreement on how central diplomacy should be in US foreign policy instead of military prowess, economic engagement, or values promotion. And there’s no shared belief on what authorities State should wrest from competing government bodies, including the White House’s National Security Council.

That lack of consensus matters, because if left unresolved, Democrats might miss a golden opportunity to remake America’s foreign policy-making apparatus should (as seems increasingly possible) a Democratic president and a Democratic Congress be in charge. Without an understood way forward, the party may find itself pontificating more than revamping.

“Until the entire party commits itself to this fight and debate, I’m unsure the president or any single Cabinet member could make the case for an empowered State Department with more funding and tools,” said Sen. Chris Murphy (D-CT), a leading proponent of an empowered State Department who’s reportedly under consideration to be secretary of state in a Biden administration.

Still, there’s no question that most Democrats believe the State Department needs all the help it can get.

“After nearly four years of the president’s mismanagement, the agency is less diverse than it was four years ago, a record number of positions or ambassadorships remain unfilled, and too many positions that have been filled are occupied by political appointees more devoted to the president’s personal interests than advancing our national interests and values,” Sen. Chris Coons (D-DE), a staunch Biden ally also reportedly up for secretary of state, told me.

To bolster the State Department, then, Democrats may require a blueprint to work from. The problem is they haven’t really had one. But the Center for American Progress (CAP), a prominent center-left think tank in Washington, aims to give them just that. 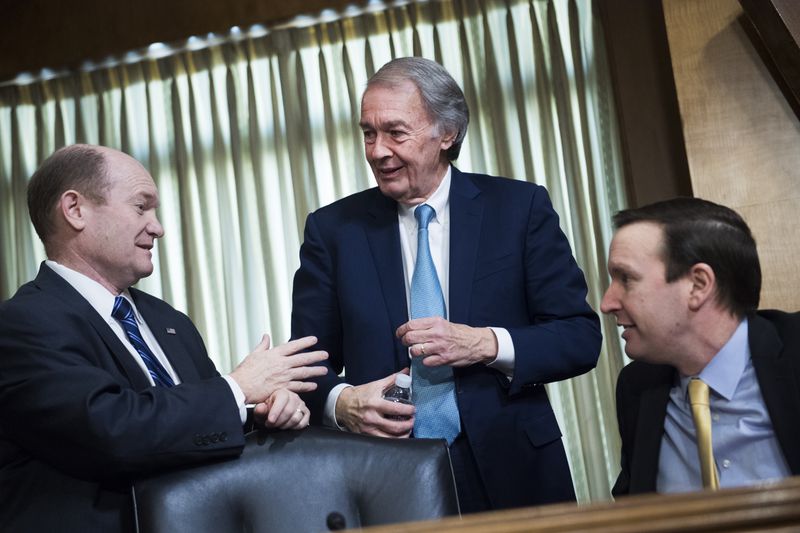 How to revamp the State Department, according to CAP

On Monday morning, CAP will release a new report titled “The First 100 Days: Toward a More Sustainable and Values-Based National Security Approach.”

I reviewed a draft copy of the report before its release, and it’s chock-full of specific ideas for what a Biden administration could do in its first three months and beyond, from “quick win[s]” such as reaffirming the president’s support for the US intelligence community to major policy moves like suspending arms sales to Saudi Arabia and removing America’s nuclear weapons from Turkey. It also says the next administration should once again value ethical leadership.

But the report’s core message is as a clarion call for progressives to finally address what they’ve long decried, before and especially during the Trump era: That, for too long, the State Department has been left to wither.

“By investing disproportionately in the military as the United States’ primary foreign policy tool, we have chronically underinvested in other national security institutions, creating a cycle of overreliance on the armed forces to manage problems that should be handled by civilian agencies,” the draft report reads.

Changing that “will require enhancing the status and influence of diplomacy and development in Washington, restoring the US Department of State’s overall primacy in foreign policymaking, and reestablishing the State Department as the lead for US engagement around the world.”

How to do that? They have some key suggestions:

Have the secretary of state draft a “National Diplomacy Strategy” to dovetail with the Pentagon’s National Defense Strategy and inform the White House’s National Security Strategy
Take back the Pentagon’s security-assistance programs that traditionally were housed at State
Have the State Department chair working-group interagency meetings, making the NSC a vice-chair
Work with Congress to pass the first State Department authorization bill since 2002, and work toward a consolidated national security budget
Initially hire 1,000 full-time employees, improve diversity within the agency’s ranks, and prioritize naming qualified foreign service officers as ambassadors before looking at others, including major political donors

Katrina Mulligan, the managing director for national security and international policy at CAP and who led the project, is aware Democrats and progressives won’t agree with all the recommendations in the report. But the goal, she told me, was to challenge orthodoxies in the party and in US foreign policy in general. 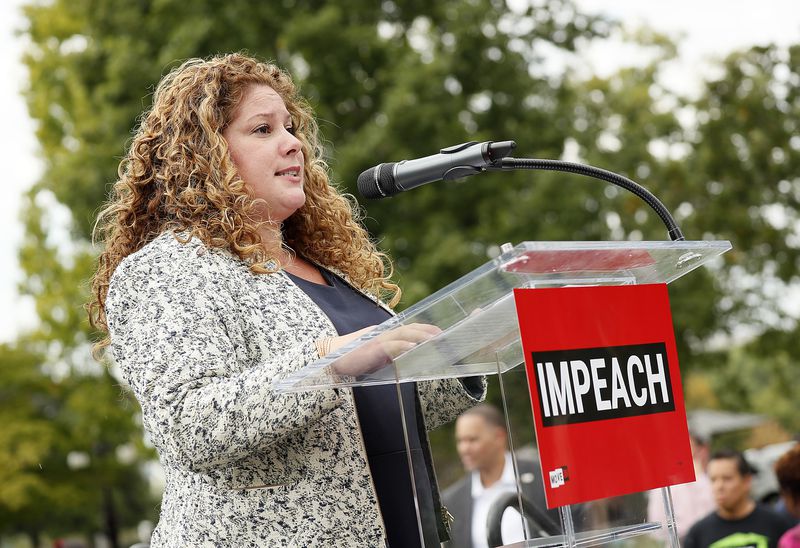 Paul Morigi/Getty Images for MoveOn Political Action
Katrina Mulligan, managing director at the Center for American Progress, speaks at the “Impeachment Now!” rally in support of impeachment against President Donald Trump outside the Capitol building on September 26, 2019.

As I discussed these and other report proposals with Democrats, including party elders, I heard more pushback than initially expected.

Leon Panetta, who served in various senior roles in the Obama administration including CIA director and secretary of defense, agreed that the State Department is now worse off than when Trump found it. “But as a result of that, I wouldn’t try to overcompensate by saying that State and diplomacy should be leading everything,” he told me.

Indeed, there is a party debate brewing around the issues CAP highlighted in its report.

Let’s zero in on just two of the report’s key recommendations: having the State Department lead interagency meetings and putting the department in charge of all security assistance going forward.

First, the meetings. It may seem like a small proposal, but it’s actually quite a big ask: Those gatherings inform the options eventually provided to the president on a major foreign policy question. Whoever leads the meeting in effect controls which options filter upward.

The NSC has traditionally chaired those working-level sessions because it’s tasked with coordinating national security decisions across the government and because it reflects how top-level meetings go: The NSC represents the White House, and the president makes the ultimate call.

Mulligan thinks that process is ripe for an update. “It is really important to have State in a substantive-type role at that first stage,” she told me, noting the NSC can chair meetings again once more senior people are around the table. “You’re talking about putting State at the forefront of the idea-generating phase, giving it a more diplomatic flavor at the early stage.”

Not everyone is supportive. “I do not think that’s a good idea,” said Michael McFaul, who served on the NSC during the Obama administration before becoming ambassador to Russia. Co-chairs are a bad idea to begin with, he argued, adding the president never shares a leadership role with the secretary of state. “It’s more logical that you follow that structure down the line.”

There was unanimous agreement on one point, though. The Pentagon typically gets at least two seats at interagency meetings: one representing the civilian side and another the military side. But the State Department usually gets just one, which means it’s outnumbered during deliberations. Most experts I spoke to said State should be encouraged to have the same number of seats — or perhaps more — than the Pentagon to ensure military options aren’t overrepresented.

Dennis Brack-Pool/Getty Images
Former President Barack Obama chairs a meeting at the Pentagon of the National Security Council on, August 4, 2016, in Arlington, Virginia.

The security assistance proposal, meanwhile, has the potential to cause a big rift between those wanting to empower State and those who favor a stronger Pentagon.

Security assistance is when the US provides weapons or money to a country so it can better defend itself. As the CAP report notes, the decision on when to provide that help and what kind of help to provide laid with the State Department after the Vietnam War. But especially over the past decade, the Pentagon built its own security-assistance team with its own budget and bureaucracy.

That would be quite the challenge. Every year, Congress passes a bill giving the Pentagon the authority to provide military aid, an authority the Defense Department likes to have. Returning all security-assistance decisions back to State would therefore require Congress to change its mind.

“If it was given to DOD it can be taken from DOD,” said Rep. Tom Malinowski (D-NJ), a House Foreign Affairs committee member and former top State official in the Obama administration. “We could find ourselves in the moment where that’s possible” with a Democrat-led Congress and Democrat as president.

One way to have that conversation would be to have an all-encompassing national security budget, as the report recommends, which would feature funding and authorities for State, the Pentagon, intelligence agencies, and more. Another is to simply bring congressional panels responsible for oversight of State and Defense together and, line item by line item, figure out which agency really should lead certain aspects of US foreign policy.

“I’d welcome a conversation in which we put all of Defense and State Department spending on the table,” Sen. Murphy told me.

On just those two issues alone, CAP’s proposals would already cause a stir. Pushing for them to become a reality would require a massive, coordinated effort by Democrats — and not all of them are convinced it’s a worthwhile one.

Those who do believe it’s time for a US foreign policy overhaul, though, basically told me if not now — with State Department so rundown and Democrats potentially in control of Washington soon — when?

“When do you decide to have the fight?” Nina Hachigian, who from 2014 to 2017 was the US ambassador to the Association of Southeast Asian Nations, asked rhetorically during our interview. “It’s a reset moment because it has to be. Let’s do it right.”

Will you help keep Vox free for all?

The United States is in the middle of one of the most consequential presidential elections of our lifetimes. It’s essential that all Americans are able to access clear, concise information on what the outcome of the election could mean for their lives, and the lives of their families and communities. That is our mission at Vox. But our distinctive brand of explanatory journalism takes resources. Even when the economy and the news advertising market recovers, your support will be a critical part of sustaining our resource-intensive work. If you have already contributed, thank you. If you haven’t, please consider helping everyone understand this presidential election: Contribute today from as little as $3.

Source: Democrats want to rebuild the State Department. They’re deeply divided over how.